Prof. Torsten Persson Lectured on the Economic and Management International Academic Forum at School of Management

At the invitation of Prof. Wu Desheng, Prof. Torsten Persson, the Secretary General of Nobel Prize in Economic Sciences Committee visited School of Management, UCAS, and gave a lecture which entitled “Individual vs Social Motives in Choice: Theory and Evidence” on June 12. The lecture was the first lecture of the Economic and Management International Academic Forum hosted by School of Management. As the first speaker of the forum, Prof. Persson not only brought a wonderful lecture to the audience, he also laid a solid foundation for the forum. 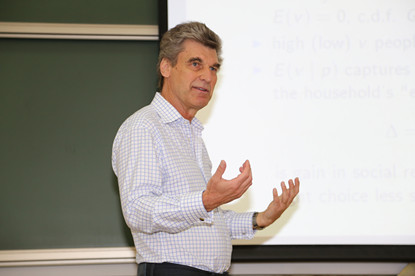 Prof. Persson analyzed mechanism of individuals vs social motives and its influence on individual decisions. The lecture focused mainly on two points. One was ethnicity in China, which studied the marriage between ethnic groups and Han nationality. The study explained the influence of such factors as material benefits, identity costs, and social norms on individual decisions. The other point was tax evasion in the UK. The research reached a conclusion after studying the changes in tax evasion between 1990 and 1992 when Thatcher poll tax was implemented, and built a dynamic structural equation model: the ratio of tax evader grew after the implementation of Thatcher poll tax and fell to the initial value after the abolishment of it, which further explained the interactive mechanism of individual motives and social motives.

Prof. Persson’s lecture was very successful. On the forum, he also accepted the certificate of Member of Advisory Board of UCAS Economics and Management International Academic Forum.