Chinese and Foreign musicians jointly performed to celebrate the 40th Anniversary of UCAS: An encounter of saxophone and traditional Chinese instruments

On October 13, 2018, a concert titled “From Chinese Ancient Silk Road to the Belt and Road Initiative” was held to celebrate the 40th anniversary of University of Chinese Academy of Sciences (UCAS hereinafter) at the Lecture Hall of International Conference Center. Among attendees were Dong Junshe, Deputy Secretary of Party Committee and Vice-President of UCAS, alumni, and over 400 students. This event was co-organized by the UCAS Modern Art Education Center of Continuing Education College and the Student Affairs Office.

The concert is a prelude to the 40th anniversary celebration on October 14, according to Zhu Wei, director of the Modern Art Education Center of the UCAS Continuing Education College. In his remarks at the opening of the concert, Zhu said that this event was held to share the joy of the celebration with alumni and students, and more importantly to improve students’ abilities to appreciate music. 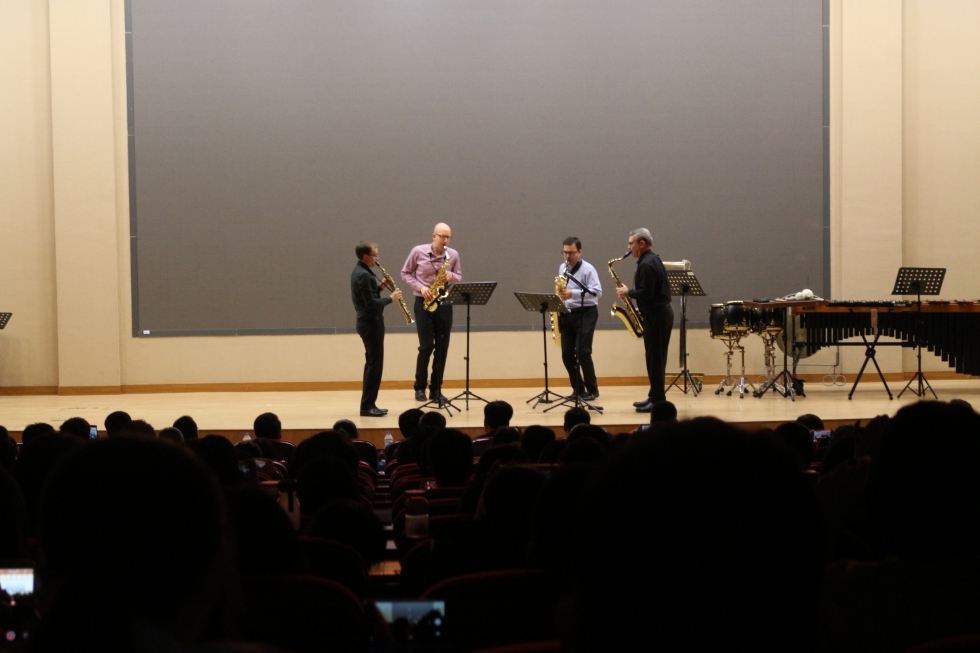 Highlighting the combination of Chinese and Western music, the concert consisted of ten pieces of music, which were performed by PRISM Quartet, one of America’s foremost chamber ensembles, and a prominent Chinese folk music orchestra from the Central Conservatory of Music. Some of those works were specially rearranged for the celebration from both Chinese and western classical music masterpieces. For example, Schumann Bouquet, a piano piece by Robert Schumann, was arranged for saxophone quartet and General’s Call,a piece of royal music in Tang Dynasty, was played with yangqin and percussion. Yangqin, percussion, sheng, erhu, pipa – these traditional Chinese musical instruments represented the Chinese music, while saxophone the Western music.Western and Chinese artists played alternately, enabling the audience to compare and contrast the Chinese and Western music.

The two-hour performance concluded with an original work named The Singing Gobi Desert composed by Sheng Zongliang (Bright Sheng), a Chinese American composer, conductor and pianist. In 2000, Sheng Zongliang travelled along the Silk Road pioneered by Zhang Qian in Western Han Dynasty. During the long journey, he collected many valuable materials for musical composition. With those materials, he wrote The Singing Gobi Desert. The work is a symphony of Saxophone, yangqin, percussion, sheng, erhu, pipa. “Traditional Chinese instruments can be played in various styles – both delicacy and roughness – so is saxophone,” Master Sheng said, “So I’m sure that the combination of saxophone and Chinese instrument can produce good effect.” 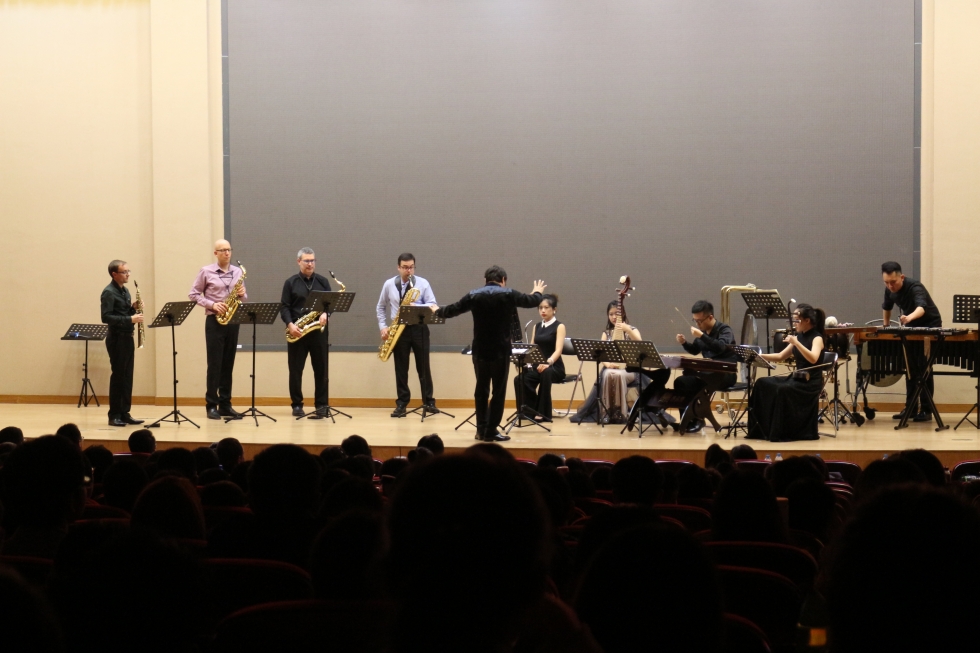 Master Sheng also explained why this concert was named “From the Silk Road to the Belt and Road Initiative”. The concert was given the name because of the links between the performance and the Silk Road. Sheng said: “By listening to The Singing Gobi Desert, you can imagine how people traded and travelled along the Silk Road. The road not only facilitated trade but also promoted cultural exchanges. Actually, many of traditional Chinese instruments were from other countries along the Silk Road. Erhu, Yangqin and Pipa were introduced to China in different dynasties. These are all gifts from the Silk Road.” Also, the music composed by Master Sheng represents good wishes that, by adhering to the spirit of mutual benefits, all countries with different backgrounds can live and develop in harmony. 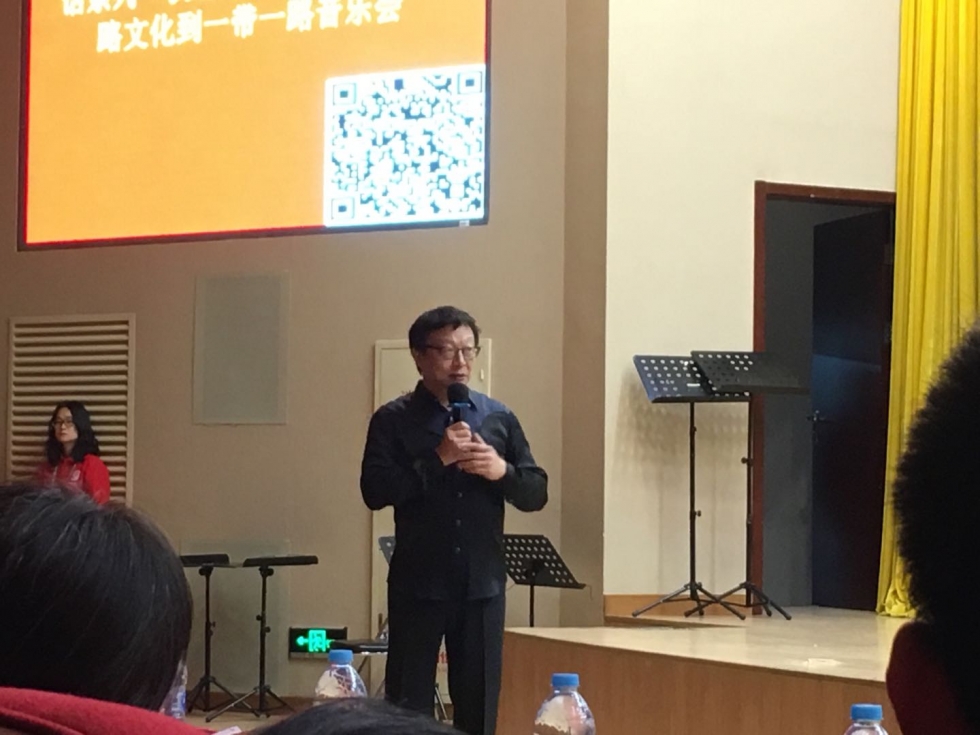 At the end of the concert, the audience applauded warmly for the excellent performance given by all the artists. During the Q&A session, they were active to ask questions on music. A student asked how to develop music appreciation. Master Sheng, the conductor, compared music taste to food taste. “Only by trying everything can you figure out what is your favorite. You should listen more, try more and then you can feel the beauty of music.” He also pointed out that students of science should listen to music because art can stimulate imagination, which is of great importance for carrying out scientific researches. 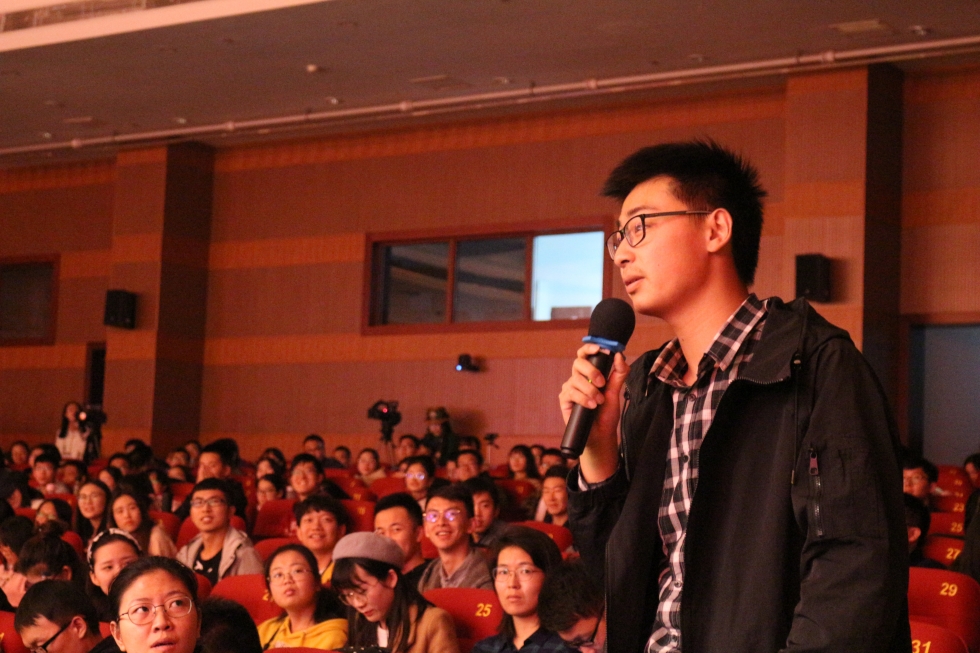 Master Sheng’s words also echoed an education strategy adopted by UCAS. The leadership have advocated to attach more importance to cultivate the artistic quality of students majoring in sciences, for they believe the intrinsic creativity and imagination of art can foster sharper scientific mind.

In fact, artistic events like this concert are always popular among students in UCAS. Tickets of the concert were clear just one minute after being released on the ticketing system. Some students were quite upset for being a half-step slow on getting the tickets, while those who were able to attend were so fortunate that they could enjoy the high-class musical performance. A student surnamed Jiang from the School of Mathematical Sciences expressed her gratitude to our university for the efforts to build a diverse and thriving university culture. She said, “The concert is quite a hit. I am so amazed by the harmonious and impressive combination of western and eastern music instruments. And I learnt much more about percussion and saxophone now. Maybe I will learn to play an instrument.”