Triplets get top scores in gaokao 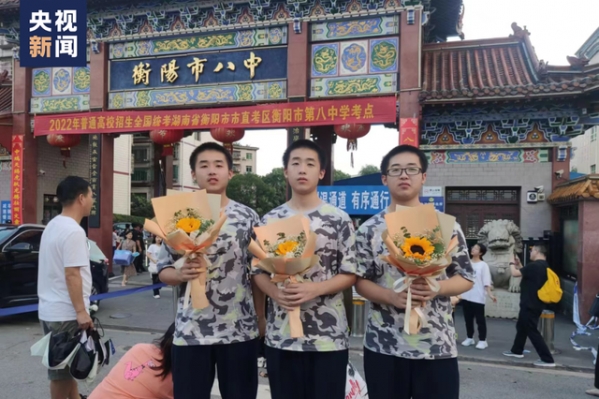 A photo of the triplets. [Photo/CCTV]

Triplets from Hengyang, Hunan province have come under the spotlight recently for their remarkable achievements during this year's national college entrance exam, or gaokao, Xinhua News Agency reported on Tuesday.

Zhao Zhenxing, the eldest, and Zhao Zhenhua, the youngest, were both admitted to the University of Chinese Academy of Sciences with respective scores of 664 and 654. Scoring 674 out of 750, the middle brother Zhao Zhenzhong has a pre-admission offer from Peking University.

Zhao Zhenxing, who will major in mathematics and applied mathematics, said he wants to work on research related to "brain science" in the future, while Zhao Zhenhua, who has chosen materials science and engineering, will focus on the use of new energy.

For Zhao Zhenzhong, his choice was chemistry. "I hope in the future I could help in the development of new drugs at cheap prices for those in need."

When the brothers were in primary school, their father worked away from home and their mother, an engineer, took time to tutor them after a day's work. "We all liked learning Math Olympiad, so Mom would teach herself first every day and then discuss with us," Zhao Zhenzhong said. "She never pushed us to study, but gave different guidance according to our interests, and made plans for us that helped us develop independent learning habits," he said.

From grade 3 in middle school to high school, the triplets were always in the same class. The three of them often encouraged each other and discussed their study. They also love sports. When they felt pressured, they would play soccer or run to relieve stress.

Their names, given by their mother, combine to read "Zhenxingzhonghua", which literally means "revitalize the Chinese nation".

"The meaning of our names is an inspiration for us and we will keep up working," Zhao Zhenzhong said.