Flora of the South China Sea Islands was published

The South China Sea Islands, consisted of four island groups, namely Xisha Qundao, Nansha Qundao, Zhongsha Qundao and Dongsha Qundao, is our Chinese territory and territorial sea since antiquity, and it always occupies the thoroughfare of the maritime Silk Road. Its most islands are far away from the mainland and always locate irregularly, scattered all around. Each botanical expedition has to be scheduled in stages, due to the strong winds and rolled waves coming from the adjacent sea areas. Botanists must overcome difficulties like seasickness, and must adapt to the harsh environment such as the high temperature, high humidity and high salinity, etc. Early in 1947, professor ZHANG Hongda investigated three islands of Xisha Qundao: Yongxing Dao, Shi Dao and Dong Dao. He recorded 48 vascular plants. After China liberation, scholars from Taiwan and Hainan surveyed plants and vegetation in the South China Sea Islands. However, large-scale plants specimen collections were organized by the SCBG in the 1970s, 1990s and recent years. This monograph was collated based on field investigation, specimen collection and identification from authors, and referring lots of previous literatures.

In the monograph, 93 families, 305 genera and 452 species (including varieties) of the South China Sea Islands were recorded and presented totally, as well as their respective Chinese name, scientific name, characters, location, distribution and economic uses of each species. Besides, plants distribution of the South China Sea Islands involves 49 reefs, which filled the lack of plant records in many reefs for a long time. This monograph can provide basic information for workers engaged in Biology, Geoscience, Oceanography, Forestry, Agriculture and Ecology, as well as for teachers and students in colleges, tourism management professionals, relevant government departments, and for other plant enthusiasts. 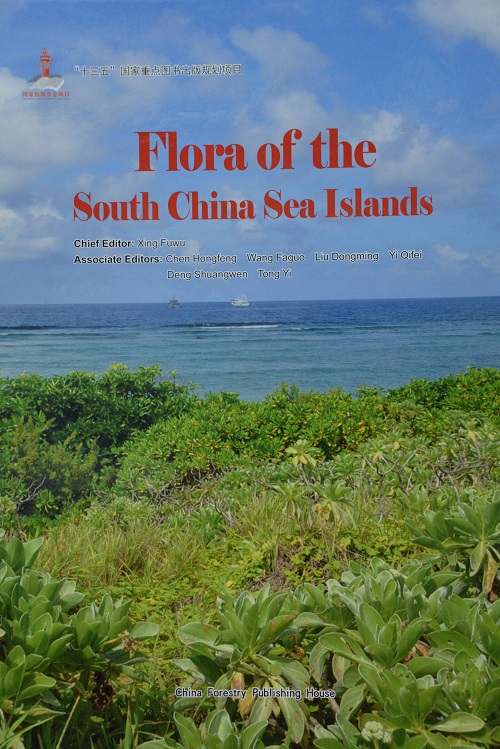 The cover of Flora of the South China Sea Islands