The Origins of Cannabis Smoking: Marijuana Use in the First Millennium BC

A chemical residue study of incense burners from ancient burials at high elevations in the Pamir Mountains of western China has revealed psychoactive cannabinoids. This study provides some of the earliest clear evidence for the use of cannabis for its psychoactive compounds, and the awareness of higher THC-producing varieties of the plant.

Cannabis has been cultivated as an oil-seed and fibre crop for millennia in East Asia. Little is known, however, about the early use and eventual cultivation of the plant for its psychoactive and medicinalproperties. Despite being one of the most widely used psychoactive drugs in the world today, there is little archaeological or historical evidence for the use of marijuana in the ancient world. This study, published in the journal Science Advances, identified psychoactive compounds preserved in 2500-year-old funerary incense burners (brazier) from the Jirzankal Cemetery in the eastern Pamirs, China. Researchers from the Chinese Academy of Sciences, the Chinese Academy of Social Sciences, and the Max Planck Institute for the Science of Human Historyshowed that people were selecting plants with higher levels of THC, and burning them as part of mortuary rituals. This is the earliest clear evidence so far of cannabis being used for its psychoactive properties.

Cannabis is one of the most infamous plants on the planet today, especially in light of rapidly changing legislature surrounding its legalisation in Europe and America. Despite the popularity of the plant for its psychoactive properties, very little is known about the earliest use or cultivation of cannabis for its mind-altering effects. Cannabis plants were cultivated in East Asia for their oily seeds and fibre from at least 4000BC. However, the early cultivated varieties of cannabis, as well as most wild populations, have low levels of THC and other cannabinoid compounds with psychoactive properties. Therefore, it has been a long-standing mystery as to when and where specific varieties of the plant with higher production of these compounds were first recognized and used by humans. Many historians place the origins of cannabis smoking on the ancient Central Asian steppes, but these arguments rely solely on a passage from a single ancient text from the later first millennium BC, written by the Greek historian Herodotus. Archaeologists have thus long sought to identify concrete evidence for cannabis smoking in Eurasia. But to date, there are few reliable, well-identified and properly dated examples of early cannabis use.

Researchers were led to the early cannabis find when they sought to identify the function of ancient wooden braziers discovered by archaeologists from the Chinese Academy of Social Scienceswho were excavating in the high mountainous regions of western China. The braziers were recovered from 2500-year-old tombs discovered in the Pamir mountain range. The international research team used a method called gas chromatography-mass spectrometry to isolate and identify compounds preserved in the braziers. To their surprise, the chemical signature of the isolated compounds offered an exact match to the chemical signature of cannabis. Moreover, the signature indicated a higher level of THC than is normally found in wild cannabis plants. The data produced by the research effort, which brought together archaeologists and laboratory scientists from Beijing, China and Jena, Germany, provides clear evidence that ancient people in the Pamir Mountains were burning specific varieties of cannabis that had higher THC levels. “Funeral is an important ritual for ancient people”, Dr. Meng Ren,  graduated from the University of Chinese Academy of Sciences said, “It is very exciting for us to see the cannabinoids being detected in these braziers after carefully analyzing the burning residues. Our findings have made great contributions to exploring ritual practices and spiritual concepts in the past.” The findings corroborate other early evidence for cannabis from burials further north, in the Xinjiang region of China and in the Altai Mountains of Russia. As Nicole Boivin, Director at the Max Planck Institute for the Science of Human History notes, “the findings support the idea that cannabis plants were first used for their psychoactive compounds in the mountainous regions of eastern Central Asia, thereafter spreading to other regions of the world.”

The THC-containing residues were extracted from braizers from a cemetery known as Jirzankal in the remote Pamir Mountains. Some of the skeletons recovered from the site, situated in modern-day western China, have features that resemble those of contemporaneous peoples further west in Central Asia. Objects found in the burials also appear to link this population to peoples further west in the mountain foothills of Inner Asia. Additionally, stable isotope studies on the human bones from the cemetery show that not all of the people buried there grew up locally. These data fit with the notion that the high-elevation mountain passes of Central and Eastern Asia played a key role in early trans-Eurasian exchange. Indeed, the Pamir region, today so remote, may once have sat astride a key ancient trade route of the early Silk Road.The Silk Road was at certain times in the past the single most important vector for cultural spread in the ancient world. As Robert Spengler, the lead archaeobotanist for the study, also at the Max Planck Institute for the Science of Human History, notes, “the exchange routes of the early Silk Road functioned more like the spokes of a wagon wheel than a long-distance road, placing Central Asia at the heart of the ancient world. Our study implies that knowledge of cannabis smoking and specific high-chemical-producing varieties of the cannabis plant were among the cultural traditions that spread along these exchange routes.”

Compared to cultivated varieties, wild cannabis plants contain lower levels of THC, one of the psychoactive compounds in cannabis. It is still unclear whether the people buried at Jirzankal actively cultivated cannabis or simply sought out higher THC-producing plants. One theory is that cannabis plants will produce greater quantities of active compounds in response to increased UV radiation and other stressors related to growing at higher elevations. So people roaming the high mountainous regions may have discovered more potent wild plants there, and initiated a new kind of use of the plant.

While modern cannabis usage is primarily as a recreational drug or for medical applications, cannabis may have been used rather differently in the past. The evidence from Jirzankal suggests that people were burning cannabis at rituals commemorating the dead. They buried their kin in tombs over which they created circular mounds, stone rings and striped patterns using black and white stones.Whether cannabis also had other uses in society is unclear, though it seems likely that the plant’s ability to treat a variety of illnesses and symptoms was recognized early on. As Yimin Yang, the lead analystfor the study at the University of the Chinese Academy of Sciences in Beijing observes, “this study of ancient cannabis use helps us understand early human cultural practices, and speaks to the intuitive human awareness of natural phytochemicals in plants.”Prof. Yang has studied ancient organic residuesin East Asia for over ten years. He notes that"biomarker analyses open a unique window onto details of ancient plant exploitation and cultural communication that other archaeological methods cannot offer." 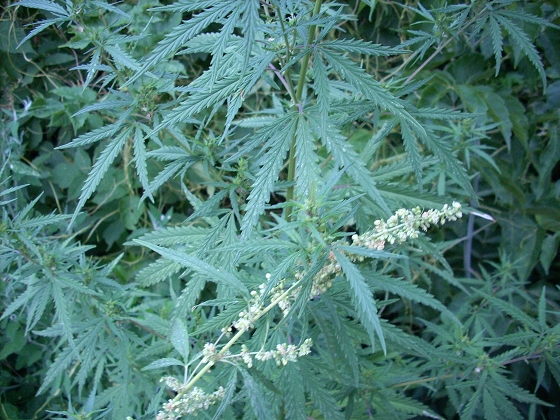 Dense patches of wild cannabis grow across the mountain foothills of Eurasia from the Caucuses to East Asia; these plants were photographed growing in the Tian Shan Mountains of Kazakhstan. (Photo credit:Robert Spengler) 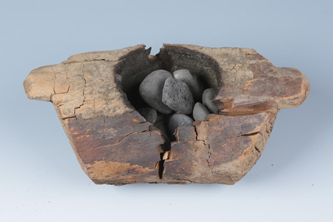 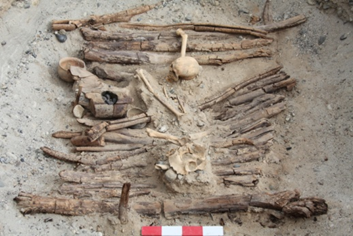 A photo of the braziers and the skeleton found in the tomb M12 as they were exposed in the excavations (Photo credit:Xinhua Wu) 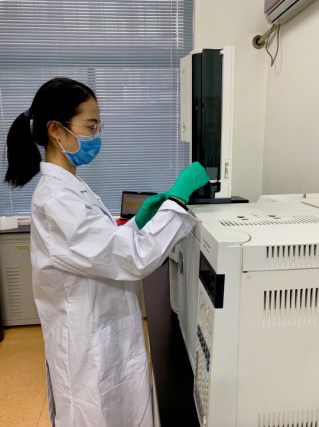 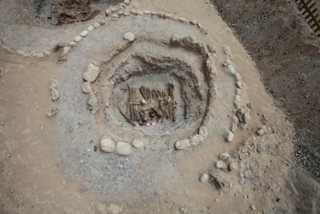 The excavation of the tomb M12 (Photo credit: Xinhua Wu)

Title: The Origins of Cannabis Smoking: Chemical Residue Evidence from the First Millennium BC in the Pamirs