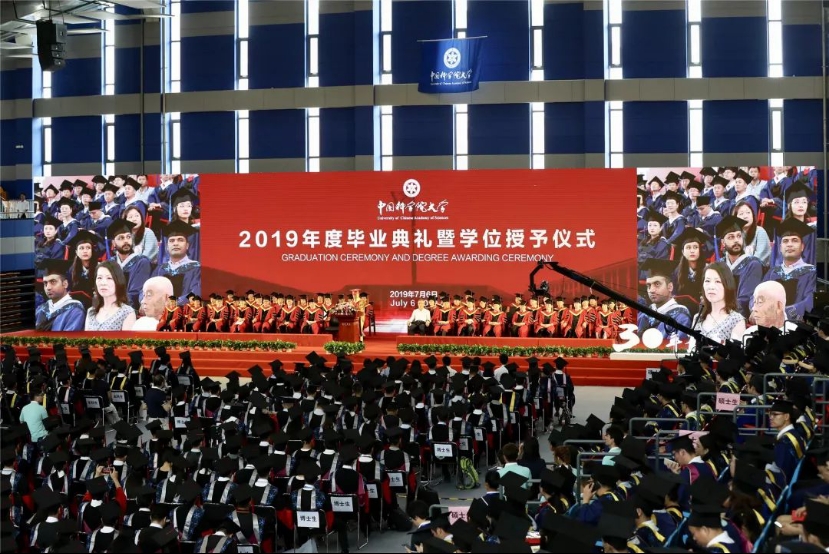 On the morning of July 6, the 2019 graduation ceremony and degree awarding ceremony of the University of Chinese Academy of Sciences (UCAS) was held at the gymnasium in the eastern part of Yanqihu Campus. University leaders, deans from all the schools, teachers and graduates attended the ceremony. 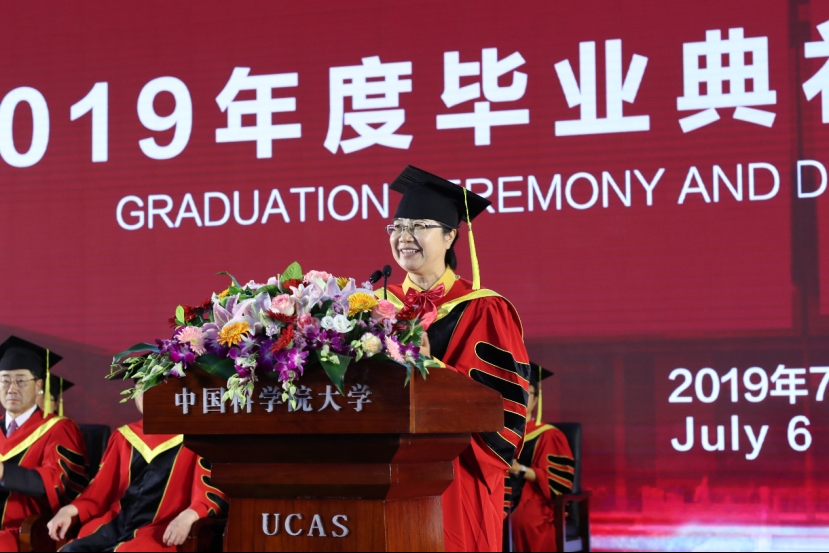 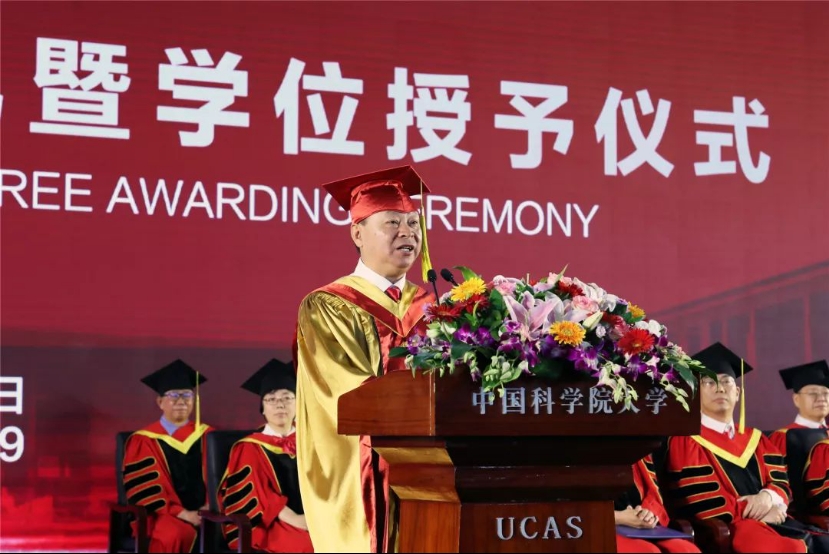 “A couple of years ago, you started a journey to excellence here. Today, you have made great accomplishments. Now, you will continue your journey committed to our country and humanity.” Prof Li Shushen said in his speech. On behalf of the university, the president promised all graduates a reencounter in thirty years.

“What you will be like in 30 years?” “What will you have contributed to the achievement of the Two Centenary Goals?” The questions posed by president were inspiring for graduates.

Cao Xing, a 2019 PhD graduate, extended sincere gratitude for UCAS. “Wherever we will go and whatever we will do after graduation, we will always combine our own demands and those of the country, consider both our own development and the country’s development, work hard to serve the country and society,” he said. 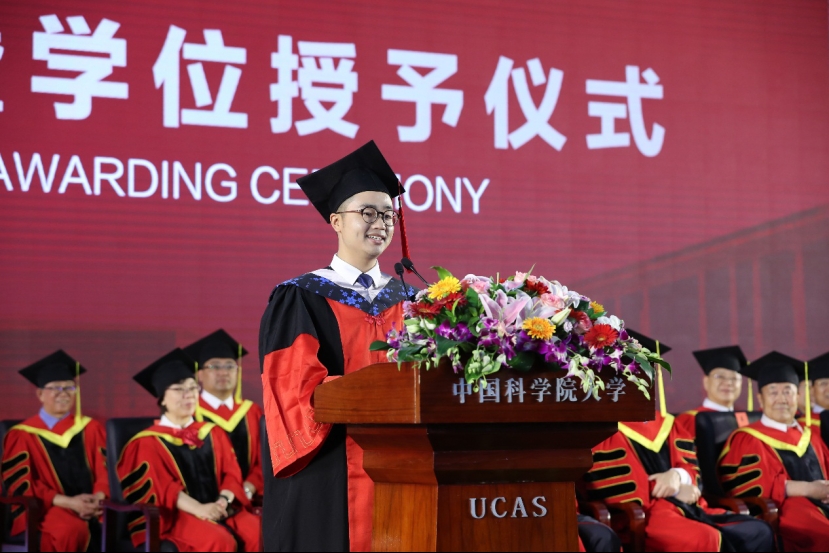 “It’s quite hard for me to imagine my life after 30 years,” Yang Shuyuan, a representative of 2019 graduate, said in her speech, “at UCAS, I have been increasingly aware of my responsibilities for myself, my family, my university and for my beloved country and of my mission to seek for truth and promote the progress of human civilization. Realizing these pushes me to grow up as fast as I can to live up to my responsibilities.”

International graduate representative Mads Vesterager Nielsen delivered a speech in both English and quite fluent Chinese. He said, “My time at the Sino-Danish Centre for education and research has been one of the most formative learning experiences of my life. I have met extraordinary people in all the organizations I have been a part of which has been tremendously inspiring.” Mads has become the leader of the Danish Chamber of Commerce in China and he promised to strive through his work to make even better relations between Denmark and China and promote the spirit of SDC and UCAS. Aalia Batool is another international graduate attending the ceremony. She comes from Pakistan. Over the past few years, she studied cancer to find better treatments at the Institute of Zoology. She felt pretty excited about her graduation and also expressed her regret that her family could not be present for the ceremony. When asked about what she would be like in thirty years, she answered with a smile, “I wish I will have become a professor.”

Throughout its 41-year history, this is the first time that UCAS has held the graduation ceremony and degree awarding ceremony in Yanqihu campus. Over 1,100 graduates from over 80 institutes and departments in cities like Changchuan, Shenyang, Shanghai, Wuhan, Lanzhou, Chengdu, Kunming, Guangzhou, Guiyang, Qingdao, Xian, Nanjing, Xining, Urumchi, Shenzhen and Beijing attended the ceremony. For years, the degree awarding ceremony has been the largest one of its kind in China. The ceremony was live broadcast on several channels, such as China Youth Online, and WeChat and webpage of UCAS.

Among all degree awardees of 2019 are 76 graduates from the School of Microelectronics of UCAS. The school is one of the first nine state-sponsored model schools of microelectronics. Administered by the Institute of Microelectronics of the Chinese Academy of Sciences (CAS), it is jointly run by institutes like the Institute of Semiconductors, CAS and Shanghai Advanced Research Institute, CAS. Most graduates of the school will work or pursue further studies at companies or institutes that focus on the development of integrated circuit. Nine of them have joined Huawei. 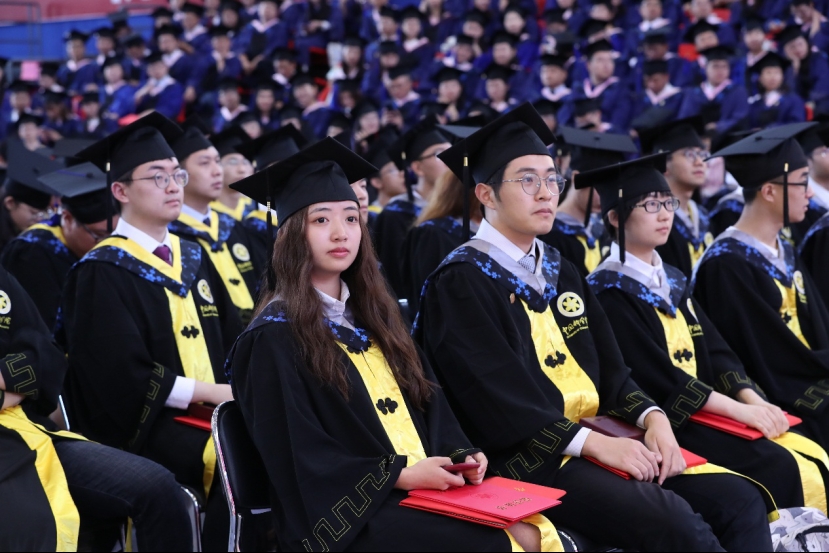 Graduates at the ceremony

Thanks to the system of integrating scientific research and teaching, postgraduate students of UCAS can learn and practice at the cutting edge of science. On the two lists of “Ten Scientific Innovations” and “Ten Technological Innovations” of 2018 in China, nine projects participated by teachers and students of UCAS appeared 11 times. UCAS ranks the fifth among all universities in the Chinese mainland and the 19th across the globe on the ranking of Nature Index 2019. On the latest ESI ranking released in May 2019, UCAS ranks the 85th and continues to be the highest among all mainland universities.