H2O2 is an important commodity chemical and potential energy carrier, and is widely used for various environmental, medical and household applications. At present, about 99% H2O2 is produced from energy-intensive anthraquinone oxidation process. Its centralized production in this way produces highly concentrated H2O2 that often has to be distributed to and diluted at the site of use, bringing additional complexity and challenges. In addition, H2O2 can also be produced from the direct reaction between H2 and O2 in the presence of Pd-based catalysts. The potential explosion hazard of this approach, however, hinders its practical application.

Electrochemical oxygen reduction reaction via a two-electron pathway represents a novel and decentralized strategy to produce H2O2. It relies on the development of active and selective electrocatalysts. The state-of-the-art candidates are Pt-Hg and Pd-Hg alloys. Despite their relatively high mass activity and selectivity in acids, these precious metal alloys are unlikely to be used on a large scale due to their prohibitive costs and toxicity (because of the inclusion of Hg). More recently, carbon-based materials emerge and demonstrate appreciable activity and selectivity for H2O2 production in alkaline solution. Unfortunately, their potentials are also limited since H2O2 is subjected to rapid decomposition in alkaline medium. For practical applications, H2O2 is more widely used in acidic media with stronger oxidation ability. As a result, it is highly desirable to pursue high-performance electrocatalysts for selective H2O2 production in acids.

In a new research published in the Beijing-based National Science Review, scientists from Soochow University (Suzhou, China), the University of Chinese Academy of Sciences (Beijing, China), Nanjing Normal University (Nanjing, China) and Trinity College Dublin (Dublin, Ireland) worked together, and reported for the first time that molybdenum telluride (MoTe2) nanoflakes had a remarkable performance for H2O2 production in acids.

When investigated as the electrocatalyst materials in O2-satuated 0.5 M H2SO4 solution, MoTe2 nanoflakes mixed with graphene nanosheets exhibited positive onset potential of 0.56 V versus reversible hydrogen electrode and outstanding H2O2 selectivity up to 93%. The mass activity was also calculated by normalizing the catalytic current with respect to the catalyst mass. The authors found that the value was in the range of ~10-102 A g-1 between 0.3-0.45 V for MoTe2, which, although not as magnificent as the state-of-the-art Pt-Hg and Pd-Hg alloys, was superior to Au alloys and carbon-based materials. Prof. Yanguang Li who led the electrochemical experiments noted that "the mass activity of exfoliated MoTe2 nanosheets at 0.4 V was 27 A g-1 -- approximately 7-10 times greater than those of Au-Pd alloys and N-doped carbon." In addition to its impressive activity and selectivity, MoTe2 nanoflakes also exhibited decent stability with negligible performance loss even after the accelerated durability test and overnight aging experiment.

In order to understand the experimental result, the authors conducted density functional theory calculations to simulate the absorption energies of key reaction intermediates on the catalyst surface. They found that the zigzag edge of 2H MoTe2 had suitable binding for HOO* and weak binding for O*, and therefore would promote the reduction of O2 to H2O2 but retard its further reduction to H2O. Prof. Yafei Li who led the theoretical work said "MoTe2 was really unique for its capability for two-electron oxygen reduction, which was not found in other transition metal dichalcogenides including MoS2 and MoSe2"

"Our study here unveiled the unexpected potential of MoTe2 nanoflakes as a non-precious metal based electrocatalyst for H2O2 production in acids, and might open a new pathway toward the catalyst design for this challenging electrochemical reaction." Prof. Yanguang Li finally commented on their interesting discovery. 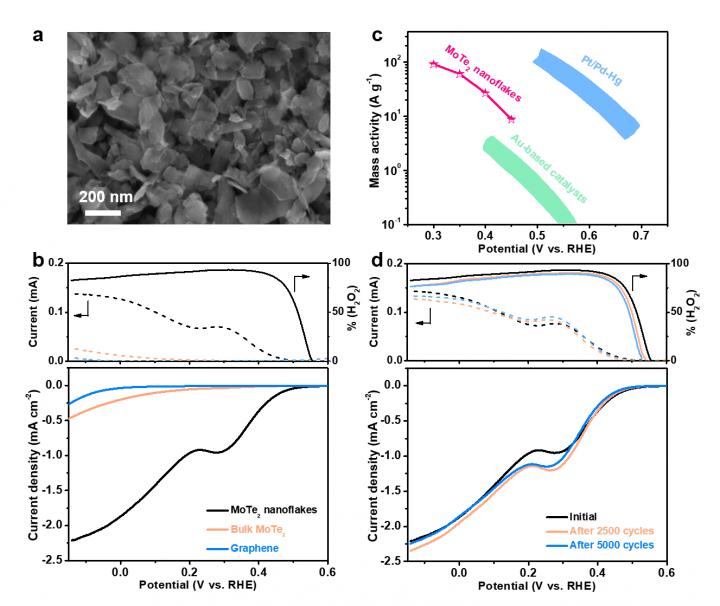