In January 7, 2016, the official website of the Chinese Academy of Sciences reported that the Institute of Semiconductors had used fluorescence white LED to send 610Mbps data through single real-time transmission channel. These findings are part of the research of a Beijing science and technology project overseen by Dr. Xiongbin Chen, who is also faculty at the School of Electronic, Electrical and Communication Engineering at the University of Academy of Sciences. In December 2016, Dr. Chen’s research was selected by the optical communication industry portal website OFweek optical communication network as one of “the top ten technologies” of the year in optical communications.

The purpose of visible light communication (VLC) is to transmit data using visible light rather than radio waves. After several years of research and development, VLC technology has been incorporated into the "13th Five-Year ‘National Science and technology innovation plan’" as a new generation of information technology. The results from Dr. Chen’s team show that high-power fluorescent LEDs in watt level, which are most commonly used in indoor lighting, are capable of 610Mbps high-speed real-time wireless optical communication. This finding brings hope that the convergence of lighting and communication may lead to practical applications in VLC technology.

Dr. Xiongbin Chen began the study of VLC technology in 2008. His team has been funded by Research on Solid State Lighting Information Network (S2-link), an important project at the Chinese Academy of Sciences. The research team's visible light communication application demonstration system has participated in the 2009 International Industrial Fair and the 2010 Shanghai World Expo, during both of which this new form of wireless communication has been popularized. In 2012, China Central Television Financial Channel's "Top High-Tech” program invited Dr. Chen to show the Visible Light Internet Access system and Visible Light Intelligent Home system on-site and named this technology "Strange Optical Router". In 2014, Journal of Optics Express reported his stage research results under the title "A 550 Mbit/s real-time visible light communication system based on phosphorescent white light LED for practical high-speed low complexity application.”

In 2015, the research team commissioned the Ministry of Industry and Information Technology’s China Telecommunication Technology Labs to authoritatively test the performance of this VLC system. Over a transmission distance of 6.2 meters with bit rate of 610Mbps in more than 2 hours. The average bit error rate of the system was 3.5e-5, which is far less than the forward error correction bit error rate threshold of 3.8e-3, as shown in Fig.1.

The research team also used this technology to develop an optical wireless internet access system which is suitable for densely populated areas. The single point access data rate was up to 100Mbps, as shown in Figure 2. 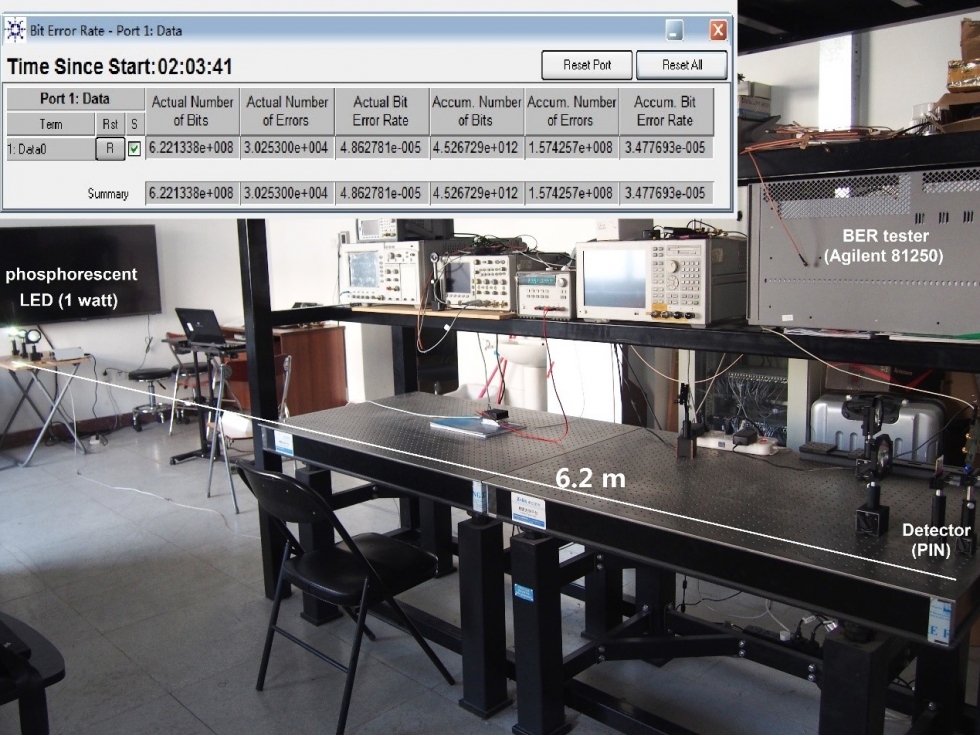 Edited by: Sun Yiming and Raymond