Bretschneidera sinensis Hemsl., a relic of the ancient Tertiary tropical flora endemic to Asia, is one of the Chinese class-I protected wild plants. Sporadically distributed in mountain forests of provinces south of the Yangtze River in China, it has recently also been found in Myanmar, Thailand, and northern Vietnam. As an ancestral species, B. sinensis occupies a peculiar systematic position, hence processes an important scientific value in the study of angiosperm phylogeny, paleogeography and paleoclimate. However, little is known about its genetics and phylogeography.

To elucidate the current phylogeographic patterns, infer the historical population dynamics of B. sinensis, so as to make recommendations for its conservation, the research group of species diversity and conservation at South China Botanical Garden, Chinese Academy of Sciences (SCBG) has chosen 256 individuals from 23 populations of B. sinensis, spanning 10 provinces of China. Three non-coding regions of chloroplast DNA (trnQ-rps16, rps8-rps11, and trnT-trnL) were amplified and sequenced. Thirteen haplotypes were recognized, demonstrating relatively high total haplotype diversity (hT = 0.739). Almost all of the variation existed among populations (98.09%, P < 0.001), but that within populations was low (1.91%, P < 0.001). Strong genetic differentiation was detected among populations (GST = 0.855, P < 0.001) with limited estimations of seed flow (Nm = 0.09), indicating that populations were strongly isolated from one another. According to SAMOVA analysis, populations of B. sinensis in China could be divided into five geographic groups: (1) eastern Yunnan to western Guangxi; (2) Guizhou-Hunan-Hubei; (3) central Guangdong; (4) northwestern Guangdong; and (5) the Luoxiao-Nanling-Wuyi-Yangming Mountain. Network analysis showed that the most ancestral haplotypes were located in the first group, i.e., the eastern Yungui Plateau and in eastern Yunnan, which is regarded as putative glacial refugia for B. sinensis in China. B. sinensis may have expanded its range eastward from these refugia and experienced bottleneck or founder effects in southeastern China. Populations in Liping (Guizhou Province), Longsheng (Guangxi Province), Huizhou (Guangdong Province), Chongyi (Jiangxi Province), Dong-an (Hunan Province), Pingbian (Yunnan Province) and Xinning (Hunan Province) are proposed as the priority protection units.

This work was supported by grants from the National Natural Science Foundation of China (31570337, 31170196). Several students and researchers from SCBG accomplished this research. Mei-Na Wang and Dr. Lei Duan were joint first authors, while Prof. Hong-Feng Chen served as corresponding author. The result have been published in PLOS ONE (2018，13(1): e018903, http://journals.plos.org/plosone/article?id=10.1371/journal.pone.0189034) under the title “Phylogeography and conservation genetics of the rare and relict Bretschneidera sinensis (Akaniaceae)”. 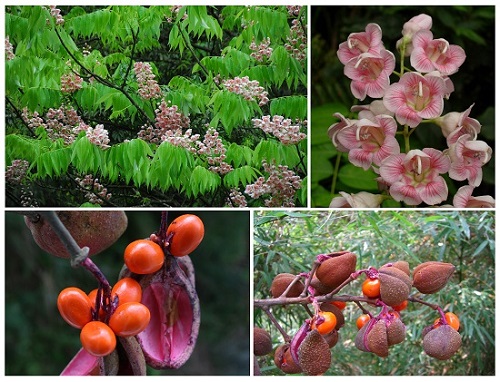 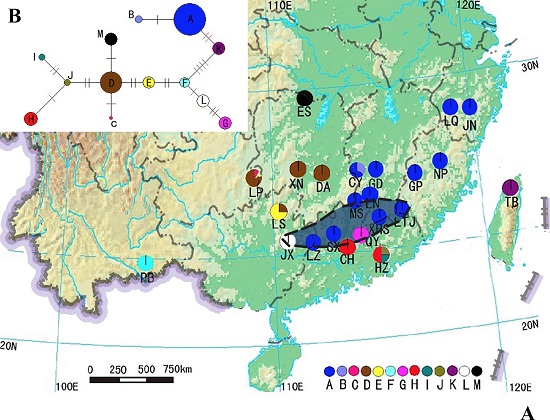 Fig. 2 Distribution (A) and network (B) of Bretschneidera sinensis haplotypes 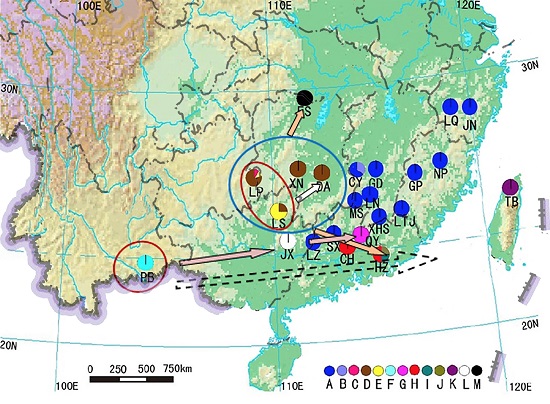