To keep pace with the “neighbor”: Pollination niche availability facilitates colonization of Guettarda speciosa with heteromorphic self-incompatibility on oceanic islands

Guettarda speciosa is a dominant woody plant on Xisha Islands, widely distributing on tropical and subtropical oceanic islands. As a typical island plant, it is a favorable species to study evolutional ecology questions relating to plants long distance dispersal. According our research data on Xisha Island, G. speciosa is an obligate out breeding plant with heteromorphic self-incompatibility, which is supposed to be disadvantageous during long distant dispersal among islands. However, this defect seems like failing to stick the G. speciosa. How can the plant make that? To answer this question, Yuanqing Xu from the Key Laboratory of Plant Resources Conservation and Sustainable Utilization of South China Botanical Garden, Chinese Academy of Sciences, proposed a novel explanation under the direction of Prof. Dianxiang Zhang,  UCAS Ph.D. supervisor, and Dr. Zhonglai Luo, professor of College of Life Sciences, UCAS.

Generally, a large part of plant species that colonized on oceanic islands is self-compatible. According to Baker’s rule, due to mate limitation, self-compatible species are more advantageous during colonizing new habitat following long distance dispersal than self-incompatible species. That means self-incompatible plants have difficulty in sexual reproduction because they need more than one individual to mate. A census indicates that only 18% of plants on islands are self-incompatible far below the 50% in mainland. Obviously, self-fertilized species are supposed to be better colonizers on islands.

How to prove this hypothesis? Similarly to the other basic ecological niches, pollination niche sustains the plants, and in turn restricts the plants’ distribution, which means the geographic distribution of the plants will be interfered by the pollinators likewise climate. If pollination niche availability is essential for the acclimatization of G. speciosa on islands, the distribution range of G. speciosa will be contained in the pollinators’ distribution (nested models) which means they share similar ecological niche. Its occurrence will concentrate in pollinator-available regions due to its dependence on pollinator. On our study sites, Agrius convolvuli is the only effective pollinator. This moth parasitic on Ipomoea pes-caprae which is a pioneer plant often co-existing with G. speciosa in coral islands but distributed more widely. 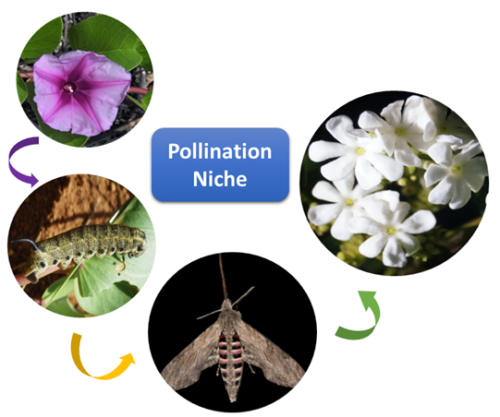 We applied Ecological Niche Modelling to predict the distribution areas of G. speciosa, the moth and its host plant. The results show that G. speciosa, A. convolvuli and I. pes-caprae share similar niche on small oceanic islands, and the empirical occurrence incline to niche overlapping areas of three species. This suggests that G. speciosa have a distribution preference for pollination niche available areas. In other words, A. convolvuli and I. pes-caprae play a significant role in the process of dispersal and colonization of G. speciosa on islands. Therefore, this conclusion proves the pollination niche theory. In this case, pollination niche availability seems to be a more important factor affecting on the plants distribution range rather than mating system. It provides an alternative comprehension for the natural selection on plant mating system during dispersal and expanding. Our study results wouldn’t deny that an out-breeding system will add disadvantage on the new colonizers, but whether it will hinder plants dispersal and colonization remains negotiable.

Even though our research focus only one species G. speciosa, it’s conducive to recover the ecology history of plants on islands. This research is published on Scientific Reports (https://www.nature.com/articles/s41598-018-32143-5).