Petalodus is a small genus of Petalodontiformes, a intriguing group of extinct marine cartilaginous fish that flourished from the Carboniferous to the Permian period.

First described in 1840, the genus is related to modern-day chimaeras and currently includes over 10 scientifically recognized species.

The newly-discovered teeth belong to Petalodus ohioenesis, a previously known member of the genus that lived some 290 million years ago (Permian period).

“The specimens are characterized by petal-shaped teeth with a spade-like crown, and a long, tongue-shaped root,” said Dr. Zhikun Gai, a paleontologist in the Institute of Vertebrate Paleontology and Paleoanthropology of the Chinese Academy of Sciences, the CAS Center for Excellence in Life and Paleoenvironment, and the University of Chinese Academy of Sciences, and his colleagues.

“The crown is circled with a band or cingulum composed of imbricated ridges at the base.”

“All seven teeth are assigned to Petalodus ohioenesis because of their vertically narrow cingulum and much longer root.” 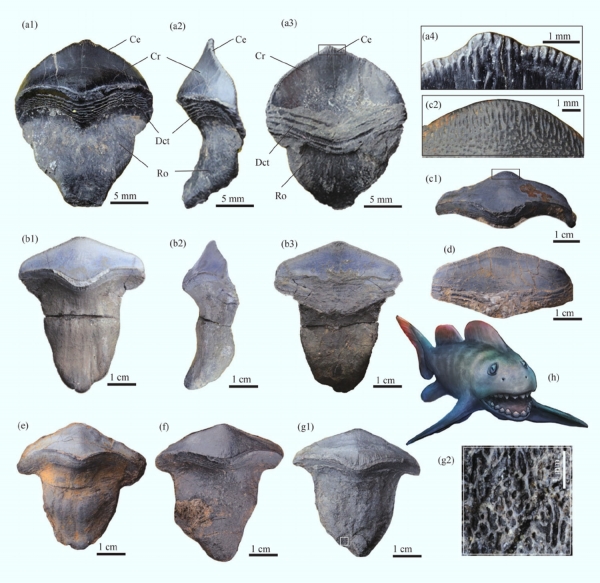 The well-preserved teeth of Petalodus ohioenesis were collected from the Qianshi limestone layer of the middle-upper Taiyuan Formation in Yangquan city, north China.

This is not only the first fossil record of Petalodus in China, but also only the second record in Asia.

“During the Carboniferous and Permian periods, the fossil site of Yangquan was part of the North China Craton at paleoequatorial areas of the Paleo-Tethys Ocean and experienced a wet tropical climate,” the paleontologists said.

“A great diversity of invertebrate fossils, including crinoids, bryozoans, brachiopods, gastropods, cephalopods, corals, fusulinids, ostracods, and trilobites, have been reported associated with the teeth of Petalodus ohioensis in this region, which would have provided an abundant food source for the diet of this species.”

The study was published in the journal Acta Geologica Sinica.