A study has identified aromatic compounds associated with incense offered by emperors and eminent monks while worshiping the sacred finger bone "sarira," or relic, of Sakyamuni at a Buddhist temple during the Tang Dynasty (CE 618–907) in China. Results were published on PNAS.

This study, conducted by researchers from the University of Chinese Academy of Sciences (UCAS), the Palace Museum, and the Famen Temple Museum, provides direct evidence of the introduction and usage of aromatics in Tang Dynasty, as well as the complex role of incense in religious rituals and court activities.

Incense has been linked to ceremonies, religions, medicines, and cosmetics worldwide for thousands of years. Although many Chinese documents of the Tang Dynasty show that numerous exotic aromatic substances had been introduced into China, little archaeological evidence has been found, and little is known about their composition, origin, and function.

Famen Temple was a Buddhist pilgrimage center built to house the sacred finger bone sarira of Sakyamuni, the founder of Buddhism. The rulers of the Tang government advocated Buddhism, believing that the worship of Buddhist relics could produce great merit, thereby guaranteeing national security and a stable life for the people. Incense is indispensable in various Buddhist rituals and a lot of incense was consumed during the luxurious royal honoring ceremonies held by the Tang emperors to enshrine and worship the finger bone sarira.

The elaborate underground palace of Famen Temple was discovered in 1987. The last recorded and largest ceremony for venerating Buddha's sarira took place in CE 873 during the reign of Emperor Yizong who reigned from CE 859–873, and these magnificent objects mostly came from that royal ritual.

"The small begonia-shaped silver container was filled with brown fragrant powder, and pale-yellow particles can be observed in this sample, indicating that it may be a mixture of different materials," said Dr. REN Meng from the Palace Museum, first author of the study.

The yellow aromatic resin inside the seventh of the "Eight-nested Boxes" was identified as elemi, providing the first evidence of elemi employed as incense associated with Buddhist rituals. The extremely high quality of these containers also shows the rarity and value of this fragrant resin in China over a thousand years ago.

Pieces of fragrant wood in the silver container provided by the Tantric monk in the late Tang period were found to be agarwood, which served an important role in sarira worship activities.

In addition, the aromatic powder stored in the begonia-shaped silver container was a mixture of agarwood and frankincense, revealing for the first time the main ingredients of Hexiang (blending of aromatics) in ancient China, as well as the contemporary knowledge of exotic incense.

"These incense samples are mainly extraterritorial or possibly from the southern periphery of China, and they were transported to the capital Chang'an and the Eastern capital Luoyang of the Tang Dynasty through the Land and/or Maritime Silk Road, shedding light on the incense trade and the function of incense in Buddhist worship practices during the Tang Dynasty," said Prof. YANG Yimin of UCAS, corresponding author of the study. 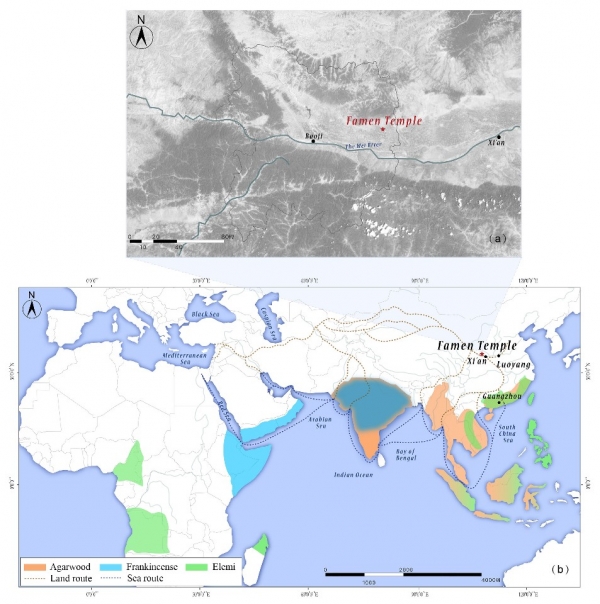 Famen Temple and the Silk Road. (a) Map showing the geographical location of Famen Temple; (b) the land and sea routes of the Silk Road as well as the main regions of the incense discussed in this study. (Image by REN Meng) 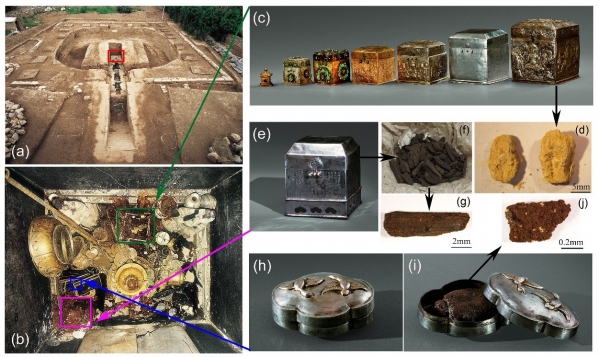 The incense and their containers discovered in the underground palace of Famen Temple. (Image by REN Meng)

Article: “Characterization of the incense sacrificed to the sarira of Sakyamuni from Famen Royal Temple during the ninth century in China,” by Meng Ren, Xinlai Ren, Xinyi Wang, and Yimin Yang.