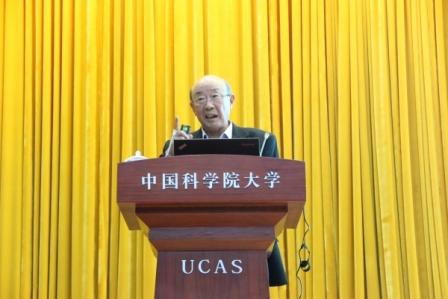 The Yanqihu Masters Forum welcomed its very first and long-anticipated lecture given by CAS academician Prof. Chen Yong, on December 7, 2015, at the Yanqihu International Conference Center. During the two-hour lecture, Prof. Chen told of his scientific research in an address titled ‘Give the Earth a B-mode Ultrasonographic Examination’. His humorous language, rigorous thinking and pioneering attitude was well-received. The Yanqihu Masters Forum is an academic forum held by UCAS.

For thousands of years, understanding of the Earth has been from earthquakes. Prof. Chen said that he has a dream that he wants to use artificial methods, sending seismic waves into the ground, to determine underground structure. He vividly likened the Earth to a watermelon, explaining that his goal is to determine whether or not the watermelon is ripe without destroying it. This idea originated from the CT imaging used by physicians as well as from remote sensing satellites used to study atmospheric motion and to forecast weather. He wants to use the basic principles of regional exploration of continental kinematics to give the Earth a B-mode ultrasonographic examination.

The first step of such research would be to find the right artificial seismic source. From electric spark plus drop hammer, booster rocket to gas exploder, from Shangguan Lake, fish pond, launching base to water-storage reservoir, ten years were used to find the right artificial seismic source. Prof. Chen said that: “Although we didn’t have enough organization and funding to support the research, we had a dream and never gave up.”

Inspired by air gun technology, which is widely used in marine seismic exploration, an experiment in Shangguan Lake was carried out in 2006 and an economical and green artificial resource was found. At the same time, considering of the distribution of China’s earthquake zones and the requirements of air gun technology in the environment, Prof. Chen carried out the experiment on the Anhui section of the Yangtze plane in order to build a high solution underground structure for the ore belt in the middle and lower reaches of the Yangtze River. Although the B-mode ultrasonographic examination of the Earth experiment has been carried out for 10 years, there are many technological limits and many problems unsolved. Prof. Chen appealed to UCAS students to participate in it. He said, “On the front-line, I find that the sense of Lei Feng is back."

At the end of the lecture, Prof. Chen quoted Dr. Martin Luther King – “I have a dream” – to encourage UCAS students and wished them a productive future in their research fields.

Prof. Chen Yong was born in Chongqing in 1942 and graduated from the Department of Geophysics, University of Science and Technology of China in 1965. He worked at earthquake sites like Xingtai for about ten years. His research concerns the nature of earthquake seismology. In the mid-1970s, he began his research about the physical properties of rock under high temperature and high pressure, applying it to nuclear waste disposal. During the past two decades, he has focused on detecting regional underground structures using artificial seismic sources and lithological changes. Prof. Chen was the former director of the Geophysical Institute, Chinese Academy of Sciences (CAS) and former deputy director of the China Earthquake Administration. In 1993, he was elected as a CAS academician. His current academic work includes serving as the director of the 15th Standing Committee of the Division of Earth Sciences, CAS, president of the Chinese Geophysical Society and director of the China Earthquake Administration Science and Technology Committee.

The Yanqihu Masters Forum is a UCAS academic communication platform offering an open, multi-disciplinary and multi-professional academic exchange platform through interactions and communications between experts, scholars and students in order to create a high-level academic forum for graduate students. The Forum motivates specialized student interests and facilitates their understanding of cutting-edge research in the natural and social sciences. The Forum will be held about 10 to 20 times per annum at the UCAS Yanqihu campus with other sub-forums depending on circumstances. It mainly offers lectures and academic reports given by experts and scholars with noteworthy themes or a combination of current scientific and social issues. Speakers interact with students. UCAS provides complete live video reports to all CAS institutes.

By Chang Yue and Li Yifei