On the morning of June 25, the graduation ceremony of the SDC (Sino-Danish Center for Education and Research/Sino-Danish College) was held on Yuquanlu campus at UCAS. 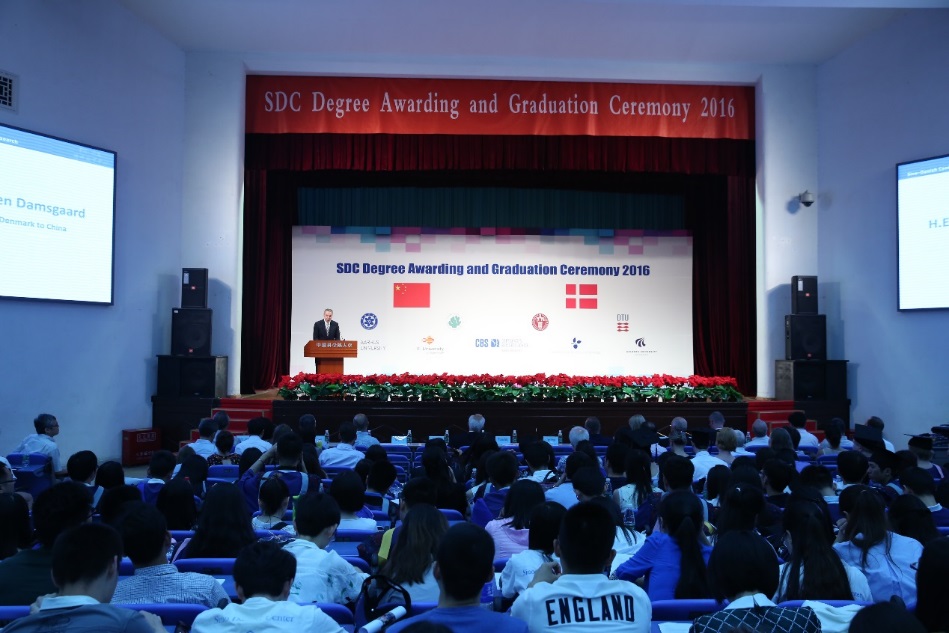 Mr. Wu Yueliang, UCAS Vice-President  of UCAS and dean of SDC, addressed the meeting. He congratulated on the students on behalf of UCAS and SDC. He mentioned that the student training quality of SDC program has reached the high levels of both the Danish collaboration universities and UCAS as we had the first double-degree PhD students graduating from SDC. 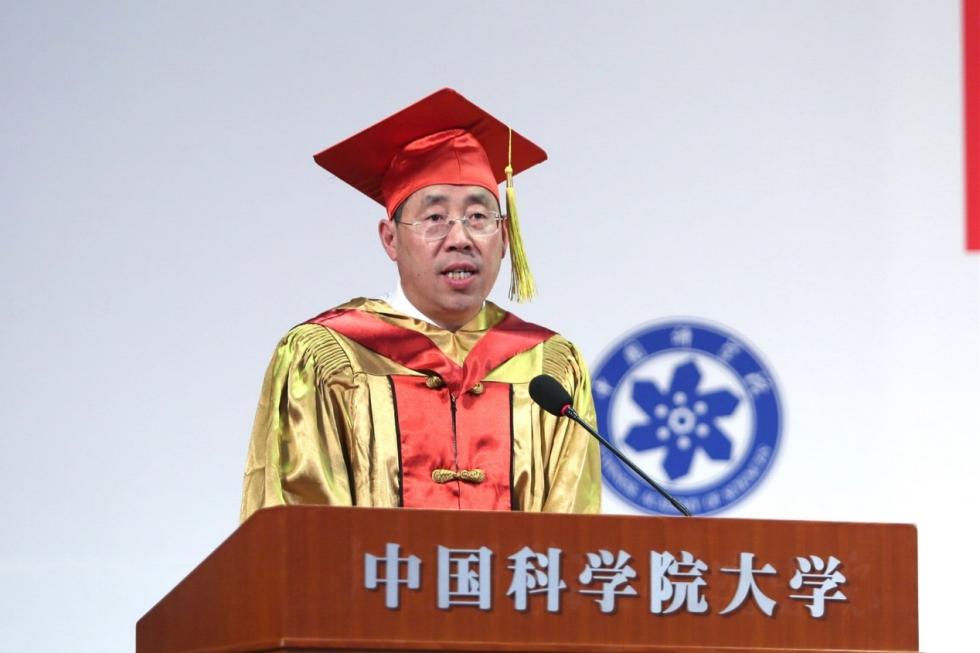 As the result of intergovernmental exchanges, more high-level exchanges have been made based on SDC platform. By quoting Chinese thinker Lao Tsu’s saying ‘the journey of a thousand miles begins with one step’, Danish ambassador Mr. A. Carsten Damsgaard emphasized that SDC graduates have taken one important step in their life journey. Last year Denmark and China celebrated 65 years of diplomatic relations. Based on this, he believed that both sides launch wider mutual cooperation in a vast number of fields and at all levels.

Mr. A. Carsten Damsgaard making a speech（Photo by Liu Yuan）

At this ceremony, Prof. Flemming Besenbacher Chairman of the board of Carlsberg Foundation & a PC of SDC for Nanoscience program mentioned that SDC shows the emphasis both countries put on cooperation and exchanges. The rapid development has attracted more Danish companies to explore business opportunities in China. This, accompanied by challenges such as aging population, requires the talented persons  such as SDC graduates to meet these challenges.

Prof. Flemming Besenbacher, Chairman of the board, Carlsberg Foundation and SDC PC for Nanoscience program （Photo by Yang Tianpeng）

SDC has been following the concept of integrating science and education and exploring new ways for international cooperation under this concept. Therefore, SDC has received wide support from many CAS institutes in teaching, student supervising and laboratory work. Mr. Yang Min from RCEES said in his speech that he was delighted to see more scientific research and educational cooperation conducted under this platform. This in turn, will be beneficial for the internationalization of CAS institutes.

33 students have received double master degrees from 2015 to 2016 and 2 students have received their double PhD degrees from SDC. Over 50 master and PhD students will receive double degrees after UCAS’s Committee Meeting this year. Mr. Wu Yueliang announced University of Chinese Academy of Sciences Degree Awarding Decision and awarded the UCAS diploma to student representatives with Mr. Lin Huimin and Mr. Yang Min.

SDC’s development has been widely supported by teachers and supervisors. Now, 140 Chinese, around 200 Danish teachers and over 40 from non-CAS institutes have been teaching at SDC. Ms. Xue Rong from CAS Institute of Biophysics addressed this ceremony. She extended her warmest congratulations to every SDC graduate student on behalf of all the SDC faculty members.

Gao Ya （Photo by Liu Yuan）

At the end of the ceremony, Lauritz B. Holm-Nielsen made the closing speech. He congratulated again on all students and mentioned that as the treasure for both China and Denmark, SDC has been founded on the firm cooperation between the two countries. Through encountering difficulties and challenges, SDC will have an even brighter future with joint efforts from both sides.

Closing speech by Prof. Lauritz B. Holm-Nielsen（Photo by Yang Tianpeng）

China and Denmark relations are at an all-time high, with increasing political trust and fruitful results in all fields. SDC will shoulder the responsibility for training talented students to serve Denmark and China's economic, social and cultural developments and to enhance cooperation and exchanges between the two countries.