On November 8, Jiayin Yuan,associate professor of Stockholm University, Sweden, paid visit to the Lanzhou Institute of Chemical Physics, Chinese Academy of Sciences(CAS), for academic exchanges at the invitation of the Key Laboratory of Chemistry of Northern Plant Resources, CAS. During the visit, he made an academicreport entitled "Poly(ionic liquid)s as innovative polyelectrolyte for energy application and beyond ".

In the report, Dr. Yuan first introduced the research direction of his group. Then, he took the special properties of ionic liquids discovered by Professor Paul Walden in 1914 as the starting point, and shared a series of research progress of his team. Recently, his group has concentrated on the preparation and application of ionic liquid polymer membranes and their functional materials by using poly(ionic liquid)s.

Dr.Yuanreceived his bachelor's degree in Chemistry from Shanghai Jiao Tong University in 2002, master's degree from the University of Siegen (Universit ät Siegen)in 2004 and doctor's degree from The University of Bayreuth(Universität Bayreuth) in 2009. From 2009 to 2010, he was engaged in his postdoctoral research at theMax Planck Institute of Colloids and Interfaces in Germany. Dr. Yuan’s research focus includes self-assembly, polyionic liquids as well as porous carbon materials and devices. He has published more than 400 papers as first author or correspondent author, and has been invited to serve as a member of external advisory editorial board, executive editorial board or editorial boardfor many distinguished journals such as Adv Mater Inter. 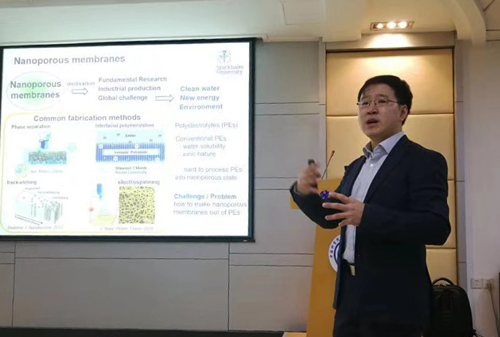