Is China a real-time superhero of the present world?

Editor's note:As China is fighting against COVID-19, many international friends including individuals, entities, groups and institutions, among others, have expressed their support and affirmation for China's fight against the epidemic. This is a letter from Sushmita Bhandari, a PhD scholar at the Institute of Geology and Geophysics, University of Chinese Academy of Sciences.

I am not an analyst nor do I have any specific expertise, I am merely a foreign student of University of Chinese Academy of Sciences witnessing the COVID-19 epidemic in China and want to express my feelings about the situation going around.

It has been a little over a month and a half since I became aware of the chaos of the coronavirus spread nationwide in China, which was coupled with the arrival of the Spring Festival holiday. While in Beijing on January 20, 2020, my attention was caught for the first time by the coronavirus outbreak in Wuhan. Initially, we didn't think this stuff was serious enough not to book a New Year trip, though we avoided travel to southern China and planned a visit to northern China.

On January 24, with luggage packed and dressed for the trip, we crosschecked the news update about the coronavirus before heading towards the railway station. Then we weren't be too sure about this trip. A day before, the virus was confined to the southern part of China and overnight it had spread all over the country. By mid-day, safety alerts and alarms flooded in our mailbox and WeChat. The Chinese government launched the free ticket canceling policy in all transportation nationwide, encouraging people to avoid unnecessary and luxury travels.

Then, we felt the thing was getting serious and couldn't collect the courage to continue the trip. We canceled all our bookings and passed the rest of the day checking news and staring at our luggage. The bigger side of our sane brain was relieved for not taking the trip though there was some disappointment with our own decision about ruining the Spring Festival holiday.

By next day, all disappointments turned into gratitude toward god for making us sane enough that day to make a rational decision. On the following day, the virus had already captivated the nation and so did the panic and dilemma among the public. But what I saw and felt next could be rare in other parts of the world.

It was just amazing that both panic and government's action against the epidemic reached to the public simultaneously. By the time the whole nation was aware about the severity of the outbreak, Wuhan City was already locked down, construction of Leishenshan and Huoshenshan hospitals just for treating COVID-19 patients in Wuhan had started, the government had declared a national health emergency and people's war against this virus and all-out efforts were urged for the prevention and control of novel coronavirus epidemic.

The government put forth policy, strategy and requested people to respond. People trust their leadership and responded immediately. As a result, the implementation of government policy to the grassroots level was felt in a click.

When Wuhan faced difficulties, white angels around the nation rushed to the city fighting the battle on the front line without any fear and hesitation. Their bodies and spirit had been pushed to the edges yet they are fighting around the clock. Thousands of them had contracted the virus and several top medics had already sacrificed their lives in this battle, but only to make their cadres stronger and more determined for victory at any cost. The hope, faith, and heartbeat of Chinese people, like academician Zhong Nanshan, top respiratory expert in his mid-80s, who is exposing himself on the front line, is an inspiration and idol to the world.

Moreover, incredible women are the leading frontiers. These beautiful souls discard their comfort zone and volunteered themselves in the battlefront. Their immense courage and bravery are making every woman proud on the planet and so am I. I wanted to salute them and send my warm wishes and love to win this adversity soon.

Going through all this epidemic I never felt unsafe in China and not once did I think of leaving China in panic. Moreover, I can feel China is keeping high-security measures for foreigners here. The responses from my institute, from the university, from the dorm management system, were assurances of high concern about foreign students. 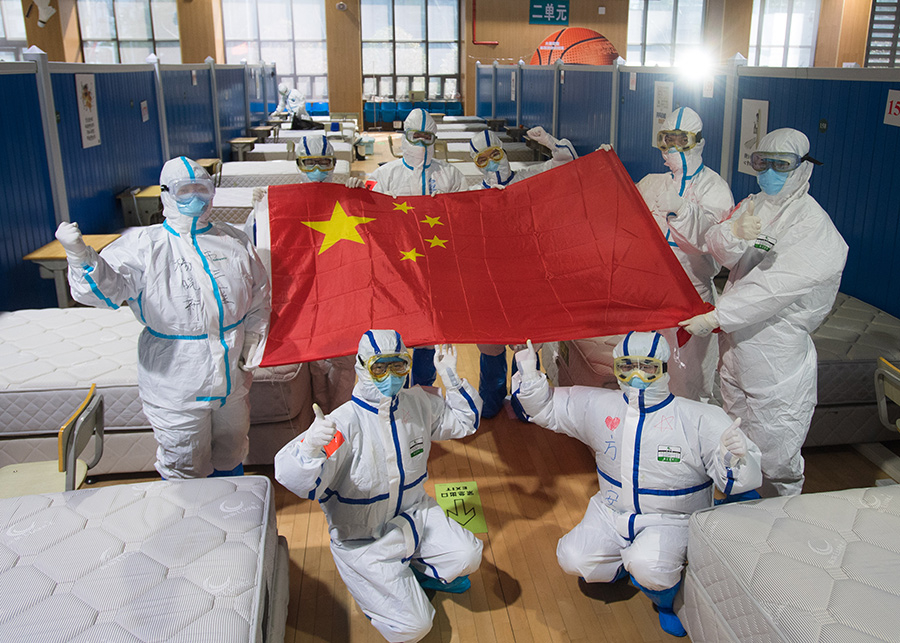 All these small gestures are enough to win someone's heart and trust. Seeing their beautiful smiles despite their overloaded shoulders, nobody will have the heart to be uncooperative in curbing COVID-19. I would like to extend my deep respect and admiration to the people of China. It had hit you hard but I believe you will emerge stronger and rise higher.

The way China is fighting this battle should be enough to move any human heart. The whole nation is staying isolated but fighting as one from top to bottom. The political leaders, academicians, technicians, security forces, entrepreneurs, couriers, grassroots community, every citizen are shouldering their responsibilities. President Xi Jinping himself is out there visiting the public at their doorsteps, refueling the courage and willpower in them. Millions of people are self-quarantined supporting the strictest measures taken by the government.

Couriers, securities, grassroots community workers are working hard to take care of people's daily needs, health, and safety. Drones and robots are being used for public services and law enforcement. The scope of online services and online education systems are broadened. Initially, there had been a shortage of medical supplies but now along with other medical needs, hundreds of millions of face masks are being produced. National mobilization of human resources and materialistic resources can be seen.

Rather we can feel the impressive fusion of mankind and technology in crisis management. People kept the faith and cooperate with their government and leadership reply with the results. I don't need to explain the yield of the arduous effort of the Chinese government. It can be seen in numerical figures now. Just after a month the new suspected cases per day in the whole country having more than 1.4 billion of population is now in single digits. The recovery rate has exceeded 75 percent. It had set a new standard on the prevention and mitigation measurements of an epidemic as said by the WHO.

Despite the record-keeping speed, intensity and coverage of China's response on this outbreak, criticism, discrimination, and racism hit some parts of the world. There had been misleading and empathyless media propaganda alleging a delayed action in the country in containing the virus, naming of the virus, hypothesis on the origin of the virus, epidemic data manipulation, violation of human rights during isolation and so on. The luxury of people's lives had been restricted but China hasn't compromised with people's health and life.

At the time of crisis, rather than extending a helping hand, biased and offensive remarks seem like mockery to this modern civilized 21st century world. Though it was first diagnosed in China, COVID-19 was not and never is matter and concern of China only. When China was leading this battlefront, the WHO declared this outbreak a global health emergency, it was meant to alert the world to be ready for the fight shortly. It is not a Chinese citizen who needs a visa for crossing borders. It's a disease that recognizes no race, no nationality, and no borders.

Wuhan has bought precious time for the world to prepare the fight against COVID-19. But still, some of the countries stay unconcerned and are caught off-guard with the virus now at their doorsteps. When it developed other epicenters then only the world started worrying about the global spread. Knowingly and unknowingly it seemed the world was trusting China's measures to contain the virus within itself, but didn't trust other epicenters to stay contained. For whom there will be this kind of global trust? Doesn't this kind of faith resembles that towards a superhero? Yes, for me, I feel China is already the real-time superhero of the present world.

China had been able to contain 99 percent of the virus within itself for a month and provide worthwhile experience and precious time for the world to prepare for combat which should not go wasted. No matter what, China is one country in the world that currently has the most knowledge of and experience with COVID-19. At present when we are living in a global village, something like the COVID-19 epidemic cannot be curbed without global solidarity. For the sake of all mankind, there is no other way than us standing together.