“We, the generation for a vigorous nation”: new mission given to young researchers in new era

On Friday, Xi, who is also general  secretary  of  the  Communist Party of China Central Committee and chairman of the Central Military Commission, told scientists at  a  symposium  that  China should  deepen  reforms  to unleash the full potential of technological innovation.

He also called for Chinese scientists  to  create  original  breakthroughs in basic research, train highly  inquisitive  and  capable young talents, strengthen international cooperation, and make new innovations  that  can  meet  the needs of the nation and its people.

Over 9,000 students replied in unison: “We, the generation for a vigorous nation.” Bai said science knows no borders, but scientists have  nationalities,  “all  of  us should have a patriotic heart and try to contribute more to our people  and  country,  as  well  as  our families who nurtured us.”

He  urged  the  students  to answer the call of duty highlighted in President Xi’s speeches and to be highly self­disciplined and self­motivated to learn.

Yang  Suiyuan,  a  biology  PhD candidate at UCAS, said his biggest takeaway from President Xi’s speech on Friday is how he highlighted  that  the  nation  needs more scientific and technological solutions than ever before to promote socioeconomic development and improve people’s livelihoods.

“We have a sacred duty to learn from  our  past  role  models  and carry the weight of the nation by creating  more  original  breakthroughs,” he said. “I will never forget our purpose of seeking the truth to serve the people.”

Zeng Yi, a professor at the Institute of Automation of the Chinese Academy  of  Sciences,  said  to make original breakthroughs, scientists not only need to identify “no­man zones” in research, but also  “leave  their  comfort  zones and work extra hard to push the limits  of  scientific  understanding.”

Research  in  key  strategic  sectors  must  be  meticulously planned  ahead  and  sustained through constant input of talents and  resources,  he  said.  Meanwhile, China’s scientific development will need to be more open and inclusive, “only then can our scientific community be a strong and popular partner in the global scientific network”.

Tang Benzhong, a noted chemist and academician of the CAS, said China needs to create a “culture of science” that encourages innovation,  values  the  scientific spirit and can foster quality talents  on  par  with  the  nation’s requirements.

“Culture  is  the  soil,  and  only fertile  soil  can  nurture  strong crops,” he said, adding that Chinese  scientists  should  strive  to forge new schools of thought in their disciplines.

Zhou Zhonghe, a noted paleontologist  and  academician  of  the CAS,  said  President  Xi’s  speech demonstrates  the  nation’s  adamant  support  for  basic  sciences and  recognition  of  curiosity  as the source of innovation in basic research.  “I  hope  these  ideas  will  soon take  root  and  be  implemented well, because they will facilitate the  sustainable  development  of our basic research,” he said.

Guo  Rui,  the  director  of  the center for space agricultural science technology and engineering research  in  Shaanxi  province, said one of the key aspects in promoting  scientific  development underscored  by  President  Xi  is tackling  major  scientific  questions  to  meet  the  needs  of  the nation.

Space  agricultural  science involves  sending  seeds  to  space and so they will be bombarded by cosmic  rays  in  microgravity  to induce mutation, which may lead to new and improved plant varieties.  For  years,  Guo  has  been using this method to breed new tree and grass varieties that can be planted in saline soil to contain the expansion of deserts and repair the ecosystems in China’s northern regions.

“The desertification process is extremely complex, and we need to enhance basic research to create new plant varieties that can suit  our  nation’s  ecological needs,” he said, adding that utilizing space technologies and other advanced  sciences  may  provide new solutions to old problems.

Cheng  Gong,  a  professor  of basic  medical  sciences  at  the School  of  Medicine  at  Tsinghua University,  said  President  Xi’s speech is very motivating and has set a course for how the scientific community can contribute to the nation’s innovation and scientific development.

“President  Xi  has  mentioned how basic science is an arduous and methodical process — we scientists  must  be  able  to  push through the monotony and make breakthroughs in key sectors that are limiting our nation’s development,” he said.

“At the same time, we also need to  prioritize  nurturing  the  next generation  of  scientific  talents, and blend innovation and scientific  exploration  seamlessly  into our daily teaching,” he said.

Yuan Lanfeng, an associate professor  at  the  National  Research Center  for  Microscale  Material Science at the University of Science  and  Technology  of  China, said schools should improve education in math, physics, chemistry,  biology  and  other  basic sciences  at  the  elementary  and middle school level to cultivate a strong  interest  and  curiosity  in children for these subjects.

“Education reform tends to cut course  load  for  these  subjects because  they  are  more  abstract and difficult for young students, but this is detrimental to building a  sustainable,  quality  scientific talent pool,” he said.

Yuan  advocates  an  improved science  education  curriculum that  focuses  on  sharpening  the youth’s ability to innovate. 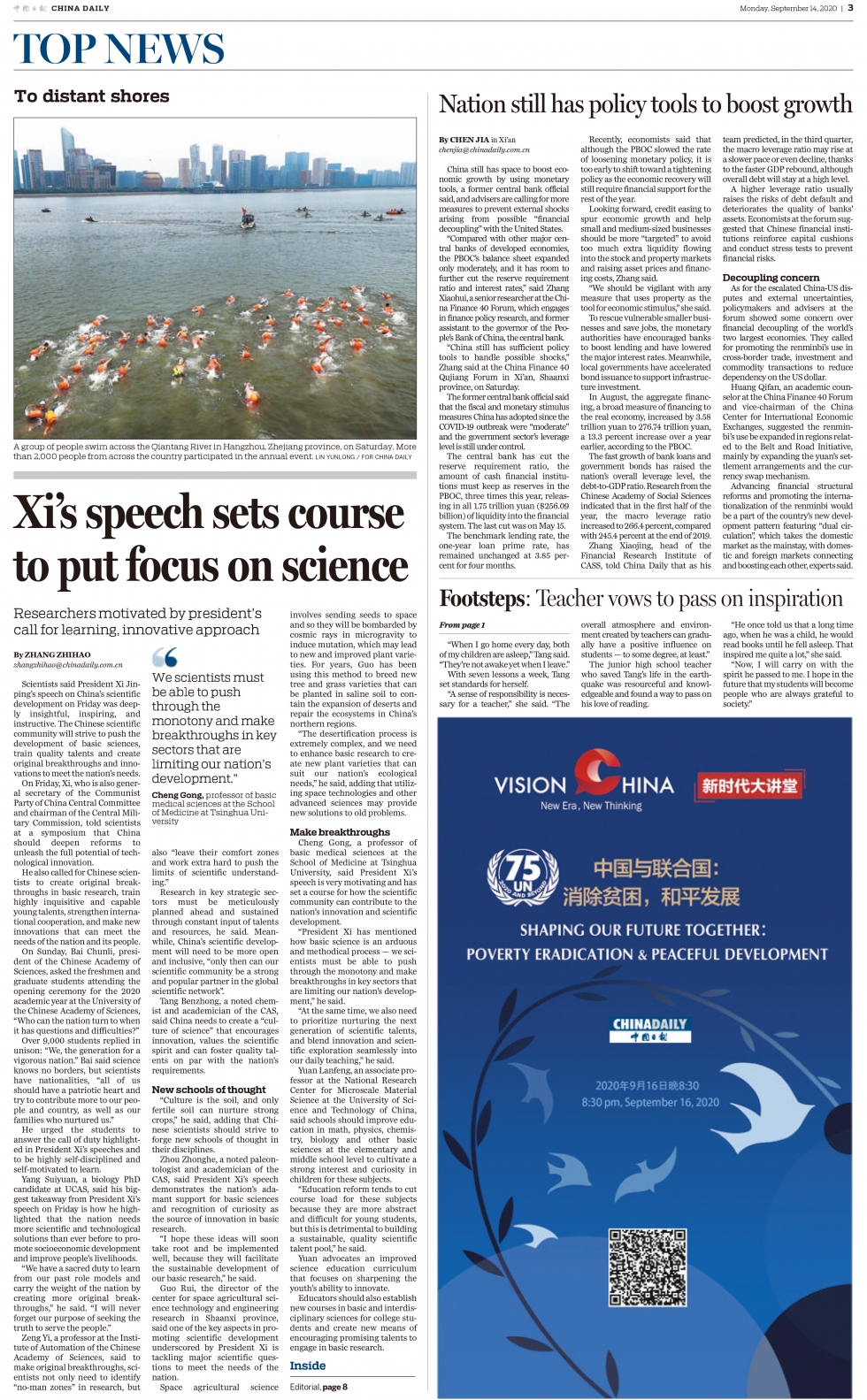